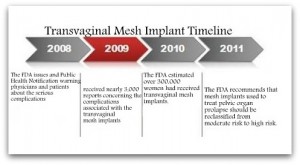 November 1996: The FDA allows clearance for Boston Scientifics’ new product called ProteGen. This is a process that will allow devices to go onto the market without a clinical testing, as long as the manufacturer can prove that it is similar to a previous device.  ProteGen was the first transvaginal mash device used to treat incontinence.

June 1998: After finding problems with the ProteGen device at a Boston Scientific manufacturing plant during an inspection, the FDA made an announcement stating that two-thirds of the complaints about complications regarding transvaginal mesh repair were about ProteGen.

August 1998: Even after the results of the inspection at a Boston Scientific manufacturing plant two months before, the FDA could not find a sustainable reason to issue a recall.

January 1999: Boston scientific recalls the product ProteGen, with a statement saying that is isn’t producing the outcome that is within company standards for performance. The company received several complaints of pain during sexual intercourse, pain, and erosion through vaginal walls. The recall had no affect on Johnson & Johnson’s product of Gynecare.

October 2008: The FDA issues and Public Health Notification warning physicians and patients about the serious complications and risks related to transvaginal mesh implants used to treat pelvic organ prolapse or Stress Urinary Incontinence. It was mentioned that complications and risks were rare, but potentially serious even life threatening.

2010: The FDA estimated over 300,000 women had received transvaginal mesh implants.

July 2011: The FDA released and update on its previous Public Health Notification regarding the safety risks associated with vaginal mesh implants. It had corrected it former statement saying that side effects were not rare, as previous stated in 2008. The update also stated that pelvic organ prolapse repair with mesh is more effective than traditional non-mesh repair, but it has a greater risk.

September 2011: The FDA recommends that mesh implants used to treat pelvic organ prolapse should be reclassified from moderate risk to high risk. The reclassification will make manufacturers conduct more studies based on human tests.

January 2012: The FDA orders 30 manufacturers, including Johnson & Johnson and C.R. Bard to conduct at least 3 years worth of studies to assess the affect of transvaginal mesh implants. Manufacturers have been faced with nearly 650 lawsuits about the painful injuries patients have, that were caused by the device used to treat pelvic organ prolapse.