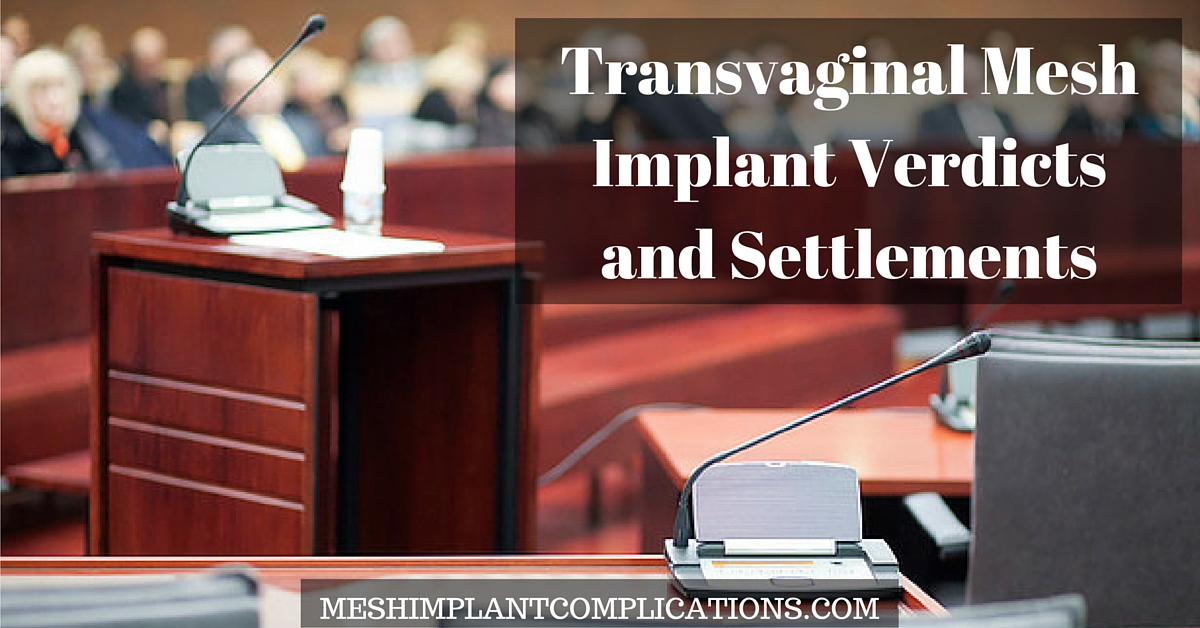 Women who have suffered from a transvaginal mesh and have filed a lawsuit could receive compensation following a verdict or settlement.

Transvaginal mesh injuries could cause an impeccable amount of pain and could forever alter a woman’s life and her family’s life. These women often times require multiple surgeries and even then there is no guarantee all the particles will be removed. Their legal options could help them pay for their medical bills as well as help with any other financial trouble they ran into while tending to their mesh complications, like loss of wages, and pain and suffering.

Have You Been Effected by Transvaginal Mesh Product?

If you have been injured by a mesh implant or have a friend or loved one who has been injured, it’s a good idea to speak with a qualified transvaginal mesh attorney about your legal options. An experienced qualified mesh attorney can help determine your eligibility for compensation due to a defective transvaginal mesh implant. There is no guarantee that your lawsuit will be successful, but options are there for you and a consultation is usually always free. Filing a lawsuit could help improve your quality of life following an injury due to transvaginal mesh complications.

As most juries seem to favor verdicts in cases regarding transvaginal mesh, the U.S. District Judge warned the device manufacturer’s to cut their losses and urged them to settle any outstanding claims they had in order to avoid outrageous court costs and potential case losses. Some companies opted to settle their disputes before cases went to trial.

Of all the mesh manufacturer’s out there dealing with legalities, Johnson & Johnson have been the slowest to offer any settlements. The J&J Company is facing the highest number of federal lawsuits in history. The company is attempting to weed out unworthy and fake claims before offering any settlements, but in January 2015 the company settled 4 lawsuits. The amount settled for was undisclosed.

In late 2014, the U.S. District Judge asked C.R. Bard to hurry up and get their cases settled or risk being faced with billions of dollars in a juror’s verdict. C.R. Bard had its first federal trial in July 2013 and faced over 2 million dollars being owed. The award included more than 250 thousand dollars in compensatory damages, as well as 1.75 million dollars in punitive damages. The company tried to appeal the verdict, but they were denied. C.R. Bard has opted to settle more of their cases, but not before they were accountable for 5.5 million dollars for a case that went to trial in California. The company also attempted to appeal the verdict, but were again denied.

In 2014 Coloplast agreed to pay more than 16 million dollars to settle more than 400 mesh lawsuits. Each claimant will receive close to $40,000 each.