Courts are starting to weigh in on people who have had mesh implant complications – and one verdict has went in favor of the victim. 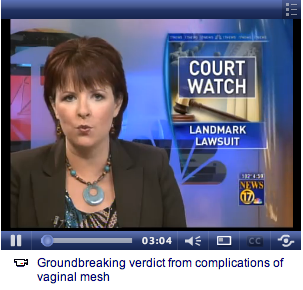 From a story at KGET:

Legal and medical professionals from across the country are paying very close attention to a groundbreaking verdict that happened in Bakersfield.

For the first time in the nation, a jury has awarded a local couple $5.5 million against the maker of a medical implant, claiming they knew their product was unsafe.

Christine Scott got the official news Monday morning at Kern County Superior Courthouse. She had a vaginal mesh surgically implanted and has had complications ever since. She and her husband sued the maker and won, making it the first victory of its kind in the nation.

“I was like ‘Thank you, God.’ We can finally get the word out to women,” said Scott after the verdict.

After some four years of legal battles and court-ordered silence with the maker of the Avaulta Mesh, C.R. Bard Medical, Scott gets some relief from the victory. An active runner, Scott got the implant to correct a leaky bladder. But, the device began cutting her colon, and tissue continues to grow through the tiny holes in the mesh. She had already had eight surgeries when we first met Scott last month.

A jury awarded Scott $5 million and her husband $500,000, claiming the mesh has ruined their love life. It’s a landmark victory, the first of its kind in the country.

The Securities and Exchange Commission indicates 47,000 women have had the mesh implanted, and 650 lawsuits are pending.

“In fact, this case, they advertised it as FDA-approved. It’s not. It’s a crime,” said Gene Lorenz, a lawyer representing Scott.

The lawyer for C.R. Bard Medical says the company stopped selling the Avaulta Mesh on July 1, 2012 in the United States because the FDA wanted more clinical trials done. But, it’s still sold in other countries.

“This is a product that has been cleared for use by the FDA and can be safe and effective when used properly and for the right patient,” said Michael Brown, attorney for C.R. Bard Medical.

“They tested this on 16 rats, 12 rabbits, four sheep and, by their own researcher’s admission, the next living being this product went into was women,” said Elaine Houghton, Scott’s attorney.

Scott says she will continue to deal with complications from the mesh, while being a voice for other women.

“The hardest part, I will tell you, through this whole thing, is having to keep quiet, watching women still get hurt. But, I was legally not able to get out there and tell and that, I’m sorry,” said Scott holding back tears. “And, that every day I was like please be over so I can talk. So, when I got that verdict it was like ‘Thank you God.’ Now we can do something.”

There will likely be an appeal in the case, but Scott says she’s just happy to no longer have the court-ordered silence, so she can talk about it. She wants to start a support group for women. And, her lawyers are working on a website for people wanting to know more about mesh implants. They hope to have that up and running by Monday.

Mesh Implant Complications: What To Do

If you have had a mesh implant and feel that it is impacting your quality of life, you may be entitled to compensation. Take the time to get a free evaluation with our implant experts and find out what your options are today.